This touching story will break your heart!

"There is something so very dreadful, so Satanic in tormenting those who have never harmed us, and who cannot defend themselves, who are utterly in our power."

Soon, summer will turn to fall and goslings will take to the skies with their parents. Shortly after they begin their juvenile flights, the hunting season will begin. These goslings may end up dead or crippled, felled by a gun or a bow and arrow. The same terrible fate may befall their parents.

If they survive the hunting season here, they may not survive when they depart for the south. When I see them soar high in the sky, heading south in their arrowhead formation, honking their goodbyes to me, I feel as if I am waving goodbye to my children who are going off to war. Unlike soldiers, they are unarmed; they're completely defenseless and at the mercy of hunters who lie in wait for the right moment to unleash their weapons and terrorize them when they stop for rest, food and water.

It tears me up inside to think of the horrors they face. Throughout the winter, I will worry about them: Are they safe? Are they hurt out there, crying in pain, crying for help, suffering? Will I see them again? Are their children safe?

It is inconceivable to me how anyone could raise a gun or a bow and arrow and shoot at a living, breathing creature who is capable of suffering pain and feeling sorrow.

According to Nobel Prize laureate Dr Konrad Lorenz, Father of the Greylag Geese, "geese possess a veritably human capacity for grief." He often said in lectures and conversations that "animals are much less intelligent than you are inclined to think, but in their feelings and emotions, they are far less different from us than you think."

If you get to know Canada geese, you'll learn that they are loving, caring creatures. They raise their goslings with tender, loving care. In 2003, Harriet, a single mother goose, raised her four goslings by herself. In 2004, The Chesters raised Little Chester, their lame gosling. Little Chester's mother hovered protectively beside him as he hobbled in the park. His Dad and siblings waited patiently for him by the water's edge. They would not leave without him. When he finally joined them, they extended their necks to him, performing greeting bows of welcome and Little Chester would reciprocate. And the family would then swim away as a whole unit. In 2005, 86P and his wife lost two goslings. They were killed when a train ran over them as they attempted to cross the tracks. We watched the whole tragedy unfurl in horror and we wondered if they felt the trauma and sorrow as we did. They did. Shortly after the tragedy, they left the nesting area with their remaining goslings, taking them on the long trek to the park pond. They appeared at the pond two days later.

What has happened to our society that we consider these loveable creatures to merely be a "bag limit" and their massacre to merely be a "harvest"? Have we become so totally debased that we allow their torture and terrorism in the name of heritage, sport and wildlife management?

Hunting is not a noble heritage; there is nothing noble about maiming and murdering defenseless creatures. A game is a sport when both sides know they're in the game, when both sides participate willingly. Man, who has destroyed millions upon millions of wildlife and the environment, should have no right to "manage" wildlife. We are not God and we are certainly not Gods of nature. Wildlife manages itself. Canada geese have been known to destroy the nests of other geese if nesting sites become overcrowded. Nature wreaks its own havoc on their lives. Snowstorms and floods destroy nests. Droughts destroy nests and increase mortality. During migration, Canada geese face enough challenges (rough weather, flying into buildings, power lines, and tress, starvation, exhaustion, etc.) without us inflicting more pain and suffering upon them.

HERE ARE TWO GOOSE HUNTING VIDEOCLIPS. WARNING: THESE VIDEOS ARE FULL OF GRAPHIC VIOLENCE TOWARD ANIMALS. PLEASE CLICK HERE AND HERE IF YOU'D LIKE TO VIEW THIS CLIP.

Hunters and hunting agencies often boast that geese and other creatures would not be around today if not for their "conservation" efforts. It is true that they have brought many species back from the brink of extinction. However, their so-called "conservation" efforts are hardly altruistic. They have worked to bring back the species with the intention of hunting them and causing them pain. Hunting is a sport to them. It's recreation. Leisure. A bloody pastime. So what if a great percentage of animals end up crippled and suffer because of them? Hunters live their lives in lies. They continue to boast about their "conservation" efforts while they go out and hurt defenseless animals. They carry around the umbrella of goodness while they carry out evil deeds. I would never bring anything into the world with the intention of causing it harm in any way.

In response to an article about Michael Koepfer, a youth minister "harvesting" a couple of lame Canada geese with a bow and arrow, Jan Fredericks, founder of God's Creatures Ministry and chairman of Catholic Concern for Animals, pointed out that "hunters in the Bible are considered to be rebels against God. Not only did Michael Koepfer unlawfully "harvest" (a better word is kill) these animals, he did something that all the leaders of God did not do. They were shepherds and cared for animals. David killed animals to protect his flock, but he didn't go out to hunt them. Esau and Nimrod were hunters and both were not examples of godly men. The youth minister should be teaching compassion for animals. Putting up a simple fence around the man's yard to keep the geese out is better than killing innocent life. Psalm 145:9 says, "The Lord has compassion on all He has made." This should be taught in every church and every seminary. Unfortunately, compassion for animals is not taught in churches."

Please CLICK HERE to read an article about the co-occurrence of human violence, criminal behavior, and animal abuse.

HERE IS A SHORT ARTICLE ABOUT NATURE'S METHOD OF CONTROLLING WILDLIFE POPULATIONS:


Researchers find that coyotes in the Chicago suburbs are doing their bit to control the Canada goose population by raiding nests for eggs.
The Chicago Tribune reports that the coyotes, often thought to be a pest, are responsible for a recent slowdown in the goose population.
Despite all of our goose complaints and problems, the overall goose population is not growing rapidly, said Charlie Paine, who has done goose censuses for the Max McGraw Wildlife Foundation in Dundee. It does look very much like predators are actually a check on the population.
Foundation researchers used time-lapse video cameras monitoring goose nests to film coyotes in action. They discovered that the parent geese usually left when a coyote approached. After a coyote raids a nest, raccoons often move in to grab the rest of the eggs, the researchers found.

Matthew Scully addresses the lies that hunters and wildlife agencies tell in his book Dominion: The Power of Man, The Suffering of Animals, and the Call to Mercy:

"Wildlife, we are constantly told, would run loose across our towns and cities were it not for the sport hunters to control their population, as birds would blanket the skies without the culling services of Ducks Unlimited and other groups......Animals such as deer, we are told, have no predators in many areas, and therefore need systematic culling. Yet when attempts are made to reintroduce natural predators such as wolves and coyotes into these very areas, sport hunters themselves are the first to resist it. Weaker animals in the wild, we hear, will only die miserable deaths by starvation and exposure without sport hunters to control their population. Yet it's the bigger, stronger animals they're killing and wounding - the very opposite of natural selection - often with bows and pistols that only compound and prolong the victim's suffering." 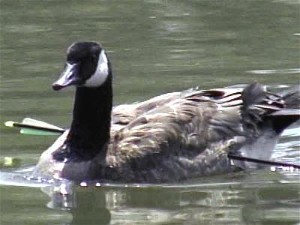 JACKSON, Miss. -- A Mississippi Canada goose is still alive after being shot with an arrow.

Wildlife officials in Jackson, Miss., believe a local hunter used the goose as a practice target.

A resident who feeds the local Canada geese and ducks noticed the arrow last month.

Although it can swim and fly, the bird shows signs of discomfort and avoids getting near other geese that might accidentally bump the arrow.

An agent from the Mississippi Department of Wildlife, Fisheries and Parks calls the arrow attack life-threatening, painful and cruel.

Two attempts to capture and treat the goose have been unsuccessful, but agents say they will keep trying.

SO HOW DO WE "CONTROL" WILDLIFE POPULATIONS IF HUNTING IS BANNED?

The ecosystem and food chain form a complex web of interdependencies that, if left alone, provide for the survival of most species. Natural predators help themselves and their prey species to survive by killing only the sickest and weakest animals. Hunters, however, kill any animal that they come across or any animal that would look best mounted above the fireplace--often the large, healthy animals needed to keep the population strong. In fact, hunting creates ideal conditions for accelerated reproduction. The abrupt drop in population leads to less competition among survivors, resulting in a higher birth rate. Even if an unusual disaster caused an animal population to temporarily overpopulate, the group would soon stabilize through natural processes. Starvation and disease are unfortunate, but they are nature's way of ensuring that the strong survive. Shooting an animal because he or she might starve or might get sick is arbitrary and destructive; the healthiest animals find a way to survive and maintain the strength of the entire herd or group.

Hunters claim that they pay for "conservation" by buying hunting licenses, duck stamps, etc. But the relatively small amount each hunter pays does not cover the cost of hunting programs or game warden salaries. The public lands many hunters use are supported by taxpayers. U.S. Fish and Wildlife Service and Canadian Wildlife Service programs, which benefit hunters, get most of their funds from general tax revenues, not hunting fees. Funds benefitting "nongame" species are scarce.

Some say it's okay to hunt because animals have no souls. Whether they have a soul or not is not the issue. The issue is: can they feel pain? Yes, they can, and that is what matters.