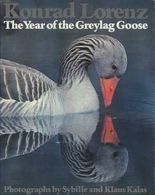 THE YEAR OF THE GREYLAG GOOSE by Konrad Lorenz

The most authoritative book about geese

Communities working to keep the geese and the peace

After years of bickering, residents of Greenwich, Conn., voted to enact a long-term birth control program to manage geese at four parks and a golf course.

It was a move that brought us together, says town conservation director Denise Savageau.

“People are no longer at each other’s throats,” says Savageau. “Property owners who complain about the presence of a few unwanted geese know they can come to us and we’ll respond, and people who were against lethal roundups no longer have to worry about the demise of their geese.”

The town relies on a corps of volunteers to oversee nest and egg treatment to curb population growth. Volunteers work in pairs, using an umbrella to entice geese away from a nest. One person keeps the geese at bay while the other tests the eggs to see if they can be humanely treated. The Humane Society of the United States says that if the eggs are able to float, they are too far along to be humanely addled. Then the eggs (and future goslings) are left as they are. Otherwise the eggs are treated with corn oil that prevents air from passing through the shell, stopping development of the embryo. The geese return to the nest and the pair is left in peace. When the eggs don’t hatch, the nest is abandoned; the nesting instinct presumably satisfied. Oiling eggs requires a permit from The Fish and Wildlife Service.

“We’re just trying to find that balance,” says Savageau, “where people and geese can co-exist.”

In Scotia, N.Y., near Albany, residents also have come to terms with geese.

Plans for slaughter were thwarted after volunteers drove off 100 geese accused of fouling a village lake, says Laura Brown of Scotia, a physical therapist and co-founder of Save the Geese.

Eventually it was determined that the lake’s E. coli bacteria was caused by human waste, not goose feces – and the result of a break in the sewer system.

An accumulation of feces was also a problem here. (While unsightly, it is distinctive for its green color, the result of grazing. Unlike dog or human feces, it generally has no odor.)

Eventually the village purchased a goose poop machine for $6,000 – less than the cost of a goose slaughter – to pick up the feces.

Candidates for office also are now screened before elections to assess attitudes toward geese.

“Voters trust us,” says Peter Muller of New York City, state and national president of The League of Humane Voters. “Residents went through a lot to save their geese and the tone has been set.”

The League of Humane Voters is a national non-profit organization with other chapters in New York, California, Georgia, New Jersey, Ohio, Indiana, Pennsylvania and the state of Washington that helps communities “elect officials that are animal-friendly,” says Muller.

Greenwich and Scotia are part of a growing movement from the East Coast to St. Louis and beyond in which residents have elected to follow the principles of the Humane Society and GeesePeace, leaders in compassionate geese management.

Ideally, biologists must assess a community’s needs and determine its tolerance level for geese before putting together a long-range plan that meets everyone’s approval, says John Hadidian of the Humane Society. Community involvement, he adds, is crucial.

So is habitat change.

“Manicured lawns are like a neon sign for nesting geese,” says New Jersey researcher Susan Russell. “Geese like short grass, access to water and no obstacles (trees or long grass) to block views of predators. Remove those incentives and the geese won’t come.”

Humans are the bad guys here, she says, replacing wetlands with urban sprawl and then complaining because geese continue to show up at locations that were probably once theirs.

“If you want to keep geese from coming, you have to create spaces they don’t find attractive,” she says. “That means strategic placement of shrubs, grasses, gates, fences and natural barriers. Have the Boy Scouts or the local garden club plant trees or long grass as a project.”

Other methods deemed humane are the use of border collies and scare tactics like pyrotechnics and lasers to entice geese to leave.

“Geese don’t go where they don’t feel welcome,” says David Feld, director of GeesePeace, whose efforts to humanely handle geese extend for a 60-mile stretch outside New York City, from Greenwich, Conn., to southern New Jersey. “If they sense they’re not wanted they’ll leave – and they won’t come back. We’ve proven that many times.”

In Rockford, Ill., south of Chicago, the park district considers geese management a major part of its responsibilities.

Instead of contracting for the services of a border collie, the parks district bought its own, Jett and Flash, with a $5,000 donation from the Humane Society to chase geese from heavily populated areas.

“Geese are creatures of habit,” says program manager Jan Herbert. “Some will just not give up a site. You chase them off and still they come back; just not as often.”

She says they are also attracted to a park lagoon.

“Does the grass taste sweeter there? Who knows?” she asks. “We’ve been able to herd them from other locations but we’ve never been able to convince them to leave the lagoon.”

The parks staff has also oiled eggs for years, resulting in a sizable decrease in population.

Scare tactics, she adds, also attest to the intelligence of these birds.

“Canada geese are very adaptable,” she says. “They might be afraid of googly-eyed balloons or sparkly ribbons for a few days … but one will soon ‘put it to the test’ and realize there is nothing to fear. The same is true of blinking lights, loud noises and plastic owls. Geese are afraid of the lasers but we know we can’t use them too many days in a row, or they adapt even to those.”

Hadidian says that geese can easily be prompted to move on. “Three hundred miles is nothing to then,” he adds.

He also says there is no shortage of space for geese, with plenty of available ponds throughout the country.

“Give them credit for perception,” he says. “Their intelligence may not be that of humans but it’s up there.”

DeMaio credits an article in The New York Times five years ago about gassing geese in nearby Union County with awakening her concern.

“I couldn’t stand the idea of destroying these beautiful creatures,” she recalls.

Armed with little more than determination, she researched habits of geese and went to government meetings to convince public officials to try non-violent methods.

“I pointed out to residents that using taxpayers’ money to kill geese was inefficient,” she says. “It took years but now we’re beginning to see the results.”

St. Louis also joined the ranks of humane communities by putting an end to slaughters at Forest Park, which Nancy Schnell, a retired middle school teacher, describes as “the city’s jewel”.

Schnell remembers the time Feld flew in at a moment’s notice.

“I took a day off from school and we had an emergency meeting to discuss strategy,” recalls Schnell, a spokesperson for St. Louis GeesePeace. Eventually the city declared a moratorium on slaughters and in celebration, the group organized a day-long “Honk in the Park” to educate people about geese.

“It’s not something we enjoy doing,” she says. “I always stop before each nest and ask the mother goose to forgive us.”

—The Humane Society of the U.S. offers online training program in oiling eggs in addition to a complete package on humane geese management. www.hsus.org

—The League of Humane Voters:  Non-profit that commits to building voter support for candidates who publicly commit to animal protective legislation. Chapters in New York, Georgia, California, New Jersey and other states. www.humanevoters.org/start

—In Defense of Animals: International animal protection group with extensive literature, video and other materials on geese.  www.idausa.org

—Permits for nest treatment can be obtained online. Contact The Fish and Wildlife Service. www.fws.gov

This report was made possible by a grant from The Fund for Investigative Journalism in Washington, D.C.